The Mighty B! Wiki
Register
Don't have an account?
Sign In
Advertisement
in: A to Z, Characters, Female characters,
and 5 more

Bibi is one of four members of The Dragonflies, located in Oakland, California. Alongside Cherry, Maude and other Dragonflies, they steal the Recreation Center from the Honeybees, resulting in a turf war between the two. She makes her only appearance in "Dragonflies."

Bibi is rather quiet (only having two lines in the series), but she seems to be the least malicious of the Dragonflies. She primarily does Cherry's bidding, as do the other Dragonflies.

Her voice is provided by guest star Audrey Wasilewski,[1] who has portrayed various characters in cartoons.

Bibi (as well as the other Dragonflies) first appears in an attempt to swim at the Recreation Center's pool, resulting in a fight between the Dragonflies and Honeybees.

When the Honeybees discover their Recreation Center is now occupied by the Dragonflies, Bibi has her first line: noticing Penny's shoes are untied, she tells her so and Penny thanks her, followed by tying her shoes.

During the Chelsea Challenge, she helps unscramble the clue: Go Go's Fro-Yo. Bibi mentions having been there before in an excited manner, followed by she and the Dragonflies heading there.

On a boat heading for Alcatraz, Bibi is the only Dragonfly to wave at the Honeybees, doing so happily. Bibi later expresses disappointment in losing after the Dragonflies are defeated by the Honeybees.

Bibi is a brown-skinned girl with brown hair, tied into pigtails. She has brown eyes and freckles. Her attire consists of a black leather jacket, a magenta shirt with a purple circle and pink trim, black skirt, white socks and black shoes. Lastly, she wears a black spiked collar on her left wrist. 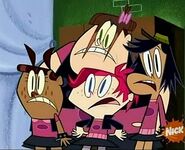