The Mighty B! Wiki
Register
Don't have an account?
Sign In
Advertisement
in: Creators, Crew, Directors,
and 4 more

Erik Wiese (last name pronounced "Vice";[1] born January 24, 1974) is an animator, prolific storyboard artist, director, and writer who is best known for his work on the animated series SpongeBob SquarePants, beginning with his character development and design for the pilot episode, "Help Wanted."

Wiese was also co-creator of The Mighty B!,[2] where he directed all of the episodes,[3] and served as the creative director, executive producer,[4] writer and storyboard artist for the series. He studied animation at the California Institute of the Arts. He has been married to Cynthia True since May 10, 2007.

Wiese served as a character layout artist, animation supervisor, and assistant director to John Kricfalusi at Spümcø, working on the animated Björk music video "I Miss You", and the Ranger Smith cartoons A Day in the Life of Ranger Smith and Boo Boo Runs Wild.

Wiese briefly worked in video games in 1995 as a storyboard and concept artist for Donald Starring in Maui Mallard and The Lion King. In recent years, Wiese served as the storyboard supervisor and head of story on The SpongeBob Movie: Sponge Out of Water, a supervising producer on the French-British animated series Dude, That's My Ghost!, and as a writer for the currently unreleased Star Wars Detours.

Katie Rice said of Wiese overseeing the artists on the series: "He was very cool about letting his artists draw their own way while at the same time expecting and encouraging high quality drawings."[5]

Wiese was heavily involved in The Mighty B!, directing every single episode of the show and occasionally writing/storyboarding on some. For the sake of brevity, his directing credits will not be listed, but his writing and storyboard work on the show is stated below.

Erik with his wife and Mighty B! co-creator, Cynthia True. 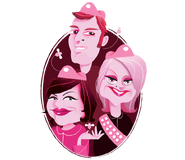