Finger is Bessie's imaginary friend, a face drawn on her left-hand index finger. She often talks to Finger and pretends to listen to him giving advice to her. He had an evil cousin named Finguere and is friends with Digit.

Finger's expression changes with the mood of the plot, for example he might have a frown if Bessie is sad. Whenever Bessie needs some worldly advice, she seeks Finger's perspective of the matter. Bessie often restates Finger's imaginary question for others to understand what he is saying. Finger may seem like a figment of Bessie's imagination, but sometimes, it seems as if he has a mind of his own. At bedtime, Bessie even has a pillow for Finger. 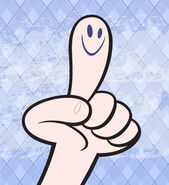 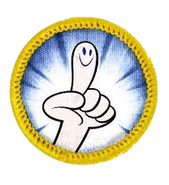 Add a photo to this gallery
Retrieved from "https://themightyb.fandom.com/wiki/Finger?oldid=13751"
Community content is available under CC-BY-SA unless otherwise noted.