The Mighty B! Wiki
Register
Don't have an account?
Sign In
Advertisement
in: Characters, Male Characters, Villains,
and 4 more

"Doppelfinger"
Finguere is Finger's evil French cousin (in truth, Bessie's right index finger). Although he seems friendly at first, Finguere proves to be a negative influence on Bessie, encouraging her to do bad things and losing her passion to earn badges. His only appearance was in "Doppelfinger."

Finguere was created by Bessie while Finger was injured, in order to make him feel better. In place of Finger, he scratched Bessie's back, picked her nose, and prank called townsfolk, then at night when they were getting ready for bed, Finguere turned against Finger.

The next morning, Bessie and Finguere were going to make an origami Eiffel tower, but they decided to watch TV instead, and to cross out some names from a reservation book in Mr. Wu's restaurant.

Later, Bessie tempts Happy with a steak, but reels it up from a tree and causing him not to snatch it. The following day, the Honeybees are swimming, except Bessie, due to Finger being hurt, but Finguere tries to steal an origami badge from Penny's backpack. Just then, Finger comes back from his weakened state and fights Finguere, who ultimately drowns.

Being Bessie's right index finger, he looks similar to his cousin Finger. However, the main differences are that Finguere has a mustache and wears a red beret. 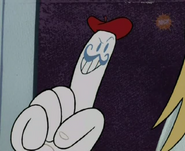