Guess you're not gonna get the badge this time!

---Gwen speaking to Bessie, "So Happy Together"

Gwendolyn "Gwen" Wu is the second antagonist and a young Honeybee Scout who is Portia's best friend,[2] and mainly acts as Portia's "second-in-command" whenever the duo gang up on Bessie.[3]

Quoting her Nicktoons profile: "She's got more than enough attitude for the both of them, twice as much energy, and all the brain power." However, a later episode shows she can tolerate Bessie more than Portia.

Gwen is primarily interested in music and fashion; she is a skilled guitarist and is shown to be a capable disc jockey (DJ). She is seen with a large family, but none of their names are known. Gwen is voiced by Jessica DiCicco.[4]

Gwen is mainly seen at Portia's side, working as a lieutenant. She’s always equipped with a “witty” comeback, which usually entails calling Bessie names, such as mocking name as "Messie Stinkenbottom."[5] She's also been shown to assist Portia in her schemes to mess with Bessie, such as tricking Bessie into believing there was a babysitting badge in "Bee My Baby," trying to scare her away in "Bee Afraid,"[6] teaching her improper etiquette in "To Bee or Not To Bee" and even guiding her into a piranha tank when Bessie lost her glasses ("Blindsided").

Her interests include cheerleading, music (hip-hop especially) and fashion. Gwen plans on "dominating" the fashion and music worlds within 10 years. She is the co-captain as one of the Pretty Pretty Princesses in the episode “We Got the Bee,” playing guitar in the band. She has a head for business and is very clever.[7]

She can be a bit of a bully (especially when it comes to Millie, as seen in “Ten Little Honeybees”), and she’s come to believe that hanging out with dorks like Bessie would ruin her reputation ("Woodward and Beesting"); however, a rarely seen side of her is shown in "Children of the Unicorn," where she partners up with Bessie to prove unicorns really do exist. This episode shows Gwen can be nice when she feels like it or at least has more tolerance towards Bessie's actions and is less antagonistic to her compared to Portia.

Her parents did not appear in the show (with the possible exception of Mr. Wu, who is speculated by some to be her father), but in "Bee My Baby" she was shown babysitting her five younger brothers.[8] An indirect comment made by Bessie in "Dang It Feels Good to Be a Gamester" implies Gwen's mother is around.

Gwen is a 10-year old girl. She has fair skin, blue eyes, and short black hair. She wears a white short-sleeved shirt with a light red collar, a red sash, a white skirt and pants the same color as her collar with white stripes on the side of them, and black sneakers. For swimming, Gwen wears a red-orange two piece swimsuit.

It has been theorized by some Mighty B! fans that Mr. Wu and Gwen are father and daughter, respectively. However, this is not stated within the show and has not been confirmed by the crew. 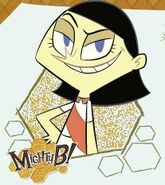 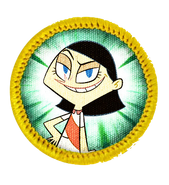 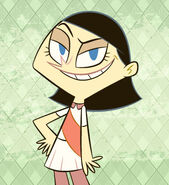 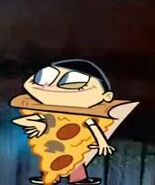 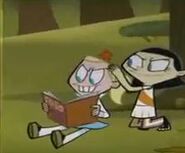 Gwen posing with a unicorn and Bessie.

Retrieved from "https://themightyb.fandom.com/wiki/Gwen_Wu?oldid=15641"
Community content is available under CC-BY-SA unless otherwise noted.