Pardon my French girls, but this is bananas! You are not 'little ladies.' You are human beings with your own ideas and interests. Blossoming flowers, not flower arrangers. Whatever happened to self-expression, progress, keeping an open mind?

Hilary Higgenbottom[2] is the single mother of Bessie and Ben. She owns and operates a coffee shop and eatery called Hilary's Café,[3] which sells cupcakes, cookies and other baked goods in addition to the caffeinated beverages. Hilary is voiced by Megan Cavanagh.[4]

Little is known of Hilary's past, except for the fact that she is a longtime motorcycle rider ("Boston Beean"), was a goat herder in Berlin ("Apoxalypse Now") and that in "Name Shame" she recounts how Bessie's middle name became Kajolica: she met a medicine man from Santa Fe while pregnant with her daughter, and he wrote it in the sand for her to see. She states it has a "magical" meaning, but has since forgotten what it is.

Hilary is a hippie, a big believer in karma and exhibiting positive energy. She has a lenient, free spirited parenting style, allowing her children to express their creativity in whatever way they find appropriate.[5] With that being said, she is more down to earth than fellow hippies The Hippie and Rainbow, and will put her foot down if Bessie and/or Ben disobey her or put themselves in danger.

She can be bowled over by Bessie just as much as everyone else is,[6] as exemplified in "So Happy Together" when she finally allows her daughter to have a dog after Bessie kept rattling off pros about having one.[7] Overall, she loves her children very much, stating in "Li'l Orphan Happy": "I have the best kids in the world!"

Hilary also has a tendency to be forgetful, as shown in “Apoxalypse Now,” where she forgot it was Ben who’s never had the chicken pox, not Bessie. It seems Bessie's intelligence may in part have come from Hilary, as in "Artificial Unintelligence" she takes apart Bessie's atom smasher with ease.

Her largest role in an episode was "Little Womyn," where Bessie begs her mother to temporarily lead the Troop 828 meetings in Mrs. Gibbons' absence. Hilary obliges, but views much of what the Honeybees have to do as archaic and stifling their imaginations, resulting in Bessie's fellow Honeybees to make paintings and other activities. Bessie, preferring the original Honeybee method, does not take kindly to these changes, coming to a point where Bessie calls her own mother by her name as an act of defiance. After Bessie dresses like a hippie and Hilary as an authoritarian, mother and daughter realize they express themselves in different ways and make up.

Frequently appearing in the first season, Hilary appears less often in the second, having a speaking role in only three of the season's episodes ("Catatonic", "Bee Nice" and "Sleepless in San Francisco"). However, she is still shown operating her coffee shop in "Awww-esome." Her last appearance is in the series finale "C'mon Get Happy!," attending Bessie and Happy's botched friendship anniversary ceremony.

Hilary wishing her daughter to have fun. ("So Happy Together")

Hilary giving Happy a hug, recognizing him as a member of the family. ("Li'l Orphan Happy")

Mother and daughter make up and share a hug. ("Little Womyn")

Hilary hard at work at her coffee shop. ("Ben Appetit") 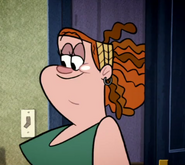 Hilary, as she appeared in the second season.

Retrieved from "https://themightyb.fandom.com/wiki/Hilary_Higgenbottom?oldid=15020"
Community content is available under CC-BY-SA unless otherwise noted.