I found a peanut!

---Penny finding a peanut in Gwen's couch, in "Bee My Baby"

Penelope "Penny" Lefkowitz is a young Honeybee Scout that somewhat resembles an ape. She is Bessie's closest human friend.[1]

Not the smartest tool in the shed, Penny makes up for it by being kind-hearted. However, she also is susceptible to peer pressure, often joining in Portia and Gwen's schemes to mess with Bessie. She is voiced by Dannah Feinglass.[2]

Penny is somewhat dopey, but is very kind and sweet.[3] She is clumsy, sometimes dim-witted and is Bessie's best friend. However, she also shows loyalty to Portia and Gwen and is occasionally torn between them and Bessie. She has a big heart and is always willing to help her friends, whether it be Bessie or Portia.

She seems to be hard on herself, as she believed she wasn't good at anything in "Eye of the Honeybee" and even called herself a "big dodo." However, within the same episode, she discovers her hidden talent to play ping pong, and develops more confidence in herself.

Penny shared a kindred friendship with Joey the animatronic kangaroo in "Penny Hearts Joey." In "Bee My Baby" Penny is shown to suffer from asthma; her father tells her not to forget her inhaler in "An I See Bee." In "Bee Afraid", she appears to have the ability to speak in a dual voice while telling her scary campfire story (though it's possible this was done for dramatic effect).

She seems to have a fondness for birds, liking chickens and befriending a turkey in "Thanksgiving Beenactment." Penny loves taffy, often eating more than she sells. She also has a habit of eating her own boogers when she's alone. Occasionally, Penny will say something unexpectedly intelligent.

She has pale skin, a light M-shaped nose and brown pigtails. Her head is shaped like a pear. She has a light brown dress, a dark olive green sash, and black shoes.

Bessie is Penny's best friend. According to Bessie, they have known each other since "the sandbox."[4] Bessie would usually have Penny tag along with her on her adventures, such as babysitting Gwen's younger brothers.[5]

Sometimes, Penny would join Portia to gang up on Bessie, presumably because Penny fell to peer pressure.

Penny has a strong father-daughter relationship with her dad, with him often encouraging her in Penny's current pursuits. He calls her "chicken" as a term of endearment. He is also heard to be good at making Pizza Padoodles, which Penny makes sure not to miss out on eating.

At Jumping Joey's, Penny becomes acquainted with the animatronic kangaroo known as Joey the Kangaroo. She develops a crush, which is heightened when (unknown to Penny) Bessie humors her by pretending to be Joey. Believing Joey himself said those things, she takes him home with her. Penny ultimately does the right thing and gives Joey back to the restaurant; it turns out he was real after all, saying her name and stating he had fun with her. 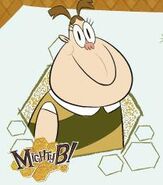 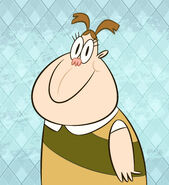 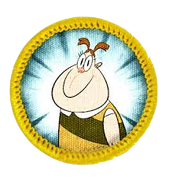 Penny, seen here with Portia and Gwen looking at Bessie.

Penny dancing with her father, Mr. Lefkowitz.
Add a photo to this gallery

Retrieved from "https://themightyb.fandom.com/wiki/Penny_Lefkowitz?oldid=15097"
Community content is available under CC-BY-SA unless otherwise noted.