The Mighty B! Wiki
Register
Don't have an account?
Sign In
Advertisement
in: Locations, Places, A to Z

San Francisco is the main setting in the show of The Mighty B!, based off the real life location. It is a combined city/county in the state of California, United States of America. It frequently mentions and features certain landmarks such as Alcatraz and the Golden Gate Bridge.

San Francisco is also home to almost all of the characters on the show, including protagonist Bessie Higgenbottom. Some characters are employed by the city's government, including Anton St. Germain (city councilman), Donald the Postman (mailman) and Hal the Ice Cream Man (dogcatcher).

Notable places seen throughout the series 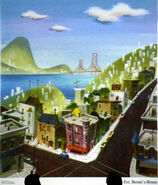 An upper view of Bessie's house with the Golden Gate Bridge in the back of the photograph.

A view in the streets.
Community content is available under CC-BY-SA unless otherwise noted.
Advertisement