The Mighty B! is an American animated television series co-created by Amy Poehler, Cynthia True, and Erik Wiese for Nickelodeon that is rated TV-Y7. This creator-driven[1] series centers on Bessie Higgenbottom, an ambitious Honeybee girl scout who dreams that, by collecting every Honeybee badge in existence, she will become a superhero known as the "Mighty Bee". Bessie lives in San Francisco with her dog Happy, her 6-year-old brother, Ben and her mom, Hilary.

The series premiered on April 26, 2008, which was the morning after Poehler's film Baby Mama had premiered. She had said prior to the premiere, "I'm going to go to bed and stay in my pajamas until 10:30 a.m. and watch Mighty B". Since its debut, the show has attracted an average of 3.1 million viewers.

It was announced on September 2008 that the show was renewed for a second season with 20 episodes, which premiered on September 21, 2009. The second season is the last, since The Mighty B! was not featured in Nickelodeon's list of renewed shows for the 2010-2011 TV season. The show ended with the series finale "C'mon Get Happy!," however "A Pirate's Life for B" was the last episode to air.

Several years before The Mighty B! premiered, Amy Poehler was a close friend of both Cynthia True and Erik Wiese.[2] After seeing a picture of True when she was a Brownie scout,[3] they came up with the concept of a girl scout in the summer of 2004.[4][5] Creating a rough pitch just weeks later,[5] co-creator Amy Poehler and a number of people at Nickelodeon met together and thought about making a "female-driven" animated television series. Poehler stated that the series would be pitched as: "where this girl is at that great age [...] where you're not boy-crazy and you're not mean to other girls". She found that enthusiasm "fascinating" and wanted to "bottle it and take it like a pill". Poehler's role on Upright Citizens Brigade was used as a basis for Bessie's character.[5]

The Mighty B! was picked up for a pilot in early 2006 under the name of Super Scout.[6] It was co-created by Poehler, Cynthia True, and Erik Wiese. Brown Johnson, president of the animation at Nickelodeon Studios, was "absolutely thrilled to have a comedy team of the caliber of Amy, Erik, and Cynthia create this iconic character for a new generation". Poehler said that she was "thrilled that the world will finally meet the funny and sweet girl-tornado that is Bessie Higgenbottom [...] Erik, Cynthia and I are so pleased to be working with the wonderful people at Nickelodeon In the words of Bessie, it's been awesome!" Originally ordered to have 13 episodes, the first season received seven more episodes in December 2006, totaling up to 20.[7]

Bessie is loosely based on a character Poehler had played during her time at improvisational comedy troupes Second City and Upright Citizens Brigade, in addition to drawing inspiration from girls she looked up to when she was younger, to whom she called "the leaders". She described Bessie as a "feisty, plucky, bossy, Honey Bee scout" and called her "our hero [...] who goes on all these adventures in hopes of collecting all these badges". Poehler referred to the show as "double the action, triple the adventures and quadruple the awesomeness". During an interview with TV Guide, when asked if Poehler was trying to appeal adults with the show, she wrote: {C}"Yeah. What I love about SpongeBob SquarePants is that it's very watchable for an adult. But kids like it because they don't feel like they're being pandered to. That was what we were looking to do with The Mighty B! [...] We wanted to do a show that had a strong female character who didn't have too many rainbows and unicorns."

Described as having an "organic" look, Erik Wiese felt its "hand-made" feel was important, with backgrounds hand-painted (main background artists being Bill Wray, Jenny Gase-Baker and Seonna Hong, who were also part of the creative team)[5] and even having some parts of episodes animated in the United States prior to shipping to overseas studios.[4] Brown Johnson described the animation as "squishy and squashy."[5] According to storyboard artist Sherm Cohen, the show was script-driven, the dialogue having been finalized before the storyboard phase.[8] Cynthia True noted that improvisation was common during recording sessions, enlisting a storyboard artist to write ad-libs made by the actors; as voice director, she tried to record all the actors together as much as possible.[4]

The series received some promotion prior to its premiere; in November 2007, the book Not Just Cartoons: Nicktoons! was released, which documented all cartoons created for Nickelodeon ("Nicktoons") up to the publishing date. It included The Mighty B! as a bonus cartoon, as the show was slated to premiere the following year.[9] That same month, the pilot episode "So Happy Together" was included as a bonus disc for the SpongeBob SquarePants DVD Atlantis SquarePantis.[10]

The series had originally been set to premiere in January 2008, but it was delayed to air three months later.[11] In April 2008, the same month Mighty B premiered, the Nickelodeon online game Nicktropolis had a locale in the game based off the then-upcoming series.[12]

Amy Poehler voices Bessie Higgenbottom, a 9-year-old Honeybee scout. Poehler describes her as "superoptimistic and a super spaz" and "a bit bossy, but with good intentions". In addition to the main character, Poehler also voiced Sissy Sullivan, a Honeybee scout from Boston whose voice is similar to Bessie's, but with a Boston accent. Dee Bradley Baker voices Happy Higgenbottom, Bessie's dog which she finds at the city harbor in the very first episode.

Andy Richter voices Ben Higgenbottom, Bessie's younger brother. Richter is also the voice of Mort on the Nick show The Penguins of Madagascar. Richter talked about The Mighty B!, quoting: "[...] another dream come true, to be able to do cartoon voices! And, also, to get to do cartoon voices for [Ben and Mort] two really funny, cool cartoons that my kids love and that I'm proud to have them, love. It’s pretty great." Dannah Feinglass voices Penny Lefkowitz, Bessie's best friend. Feinglass is also a writer for the show. Grey DeLisle voices Portia Gibbons, a Honeybee scout, Megan Cavanagh voices Hilary Higgenbottom, the single mother of Bessie and Ben, and Jessica DiCicco voices Gwen Wu, Portia's friend.

The series received generally positive reviews from television sources and critics. One review from Brian Lowry of Variety explained it contains a "kind of crazed energy and inventiveness that isn't associated often enough with girl-oriented children's fare [...] [and] opts for a more elevated approach – like that aforementioned roller-coaster jaunt, taking a free-spirited jump off the tracks and trusting its audience to hang on for the ride."

David Hinckley of Daily News gave the show four stars while writing that The Mighty B! "has a decent shot at becoming a pre-tween fave." Aaron H. Bynum of Animation Insider called the series a "good, brainless cartoon [...] [Because] viewers shouldn't ever be bored with Bessie," but criticized part of its humor for not "try[ing] to do too much, which may ultimately work against it when the story calls for the characters to do too little.

Denver Post contributor Joanne Ostrow declared the protagonist of the series a "female answer to SpongeBob SquarePants", and stated that the show could also be entertaining for adults.[13] Among the favorable reception was a mixed review from Common Sense Media's Emily Ashby. She said while it "maintains a chaotic pace, and there are no real attempts to teach strong positive lessons [...] Young tweens will likely enjoy Bessie's outlandish, fantasy-fueled adventures – which are fast-paced and, on the surface, entertaining."

Ed Liu of Toon Zone called The Mighty B! a show that he admires more than what he "truly love[s]", stating: "There is prodigious talent behind it and it's the wonderfully energetic boisterous comedy. It's clearly trying very, very hard to be entertaining and largely succeeds [...] I almost feel bad for not liking The Mighty B! more than I do, and I'm still not sure why I don't enjoy it more". He noted it was worth pointing out that more recent episodes of the show seem "more assured and funnier" than the eight episodes on the We Got the Bee DVD. Michael Arbeiter of Bustle said in a retrospective review for the show that the show was "vibrant."[14]

Author David Perlmutter, who has written books focusing on cartoons, stated The Mighty B! is "genuinely funny, engaging and engrossing"[15] and that "[it] deserved a far longer run than it was allowed," praising the "high quality" of the show, in particular its voice acting.[16]

Although there are some who don't like The Mighty B! for a number of reasons, It still managed to find it's own fanbase. Many of which would visit TV.com or The Mighty B! Fanon Wiki to share fan-made episodes, characters, and art similar to other shows in the past. Daniel Radcliffe is a notable celebrity who says he is a "massive fan" of the series, telling Poehler this upon meeting her.[17]

During its run, Nickelodeon made ten online games where one could play as Bessie and the others on the channel's website; some were original ideas, while others were based off of episodes. Several comics were also published in Nickelodeon Magazine, most of which were written by Jessica Gao.[18]

Two compilation DVDs of were released of the series: We Got the Bee! and BEEing Bessie Higgenbottom, both released in 2009. They contained selected episodes from the first season in addition to special features, such as interviews with the cast and crew, animatics and karaoke for the songs Running with the Rainbow Unicorn and Buzz Off!.

The show was also featured as a question on the game show Who Wants to Be a Millionaire?, the question being: "Who was the voice of Bessie Higgenbottom on the Nickelodeon show "The Mighty B!"?" The contestant, unsure of the answer, asked the audience what they thought; the majority incorrectly guessed Sarah Silverman. Ultimately, the contestant chose to use his remaining lifeline and skip the question, thereafter the correct answer was revealed.[19]

The Mighty B! premiered at 10:30 AM on April 26, 2008, and scored "above average for Nickelodeon programming" in the Nielsen ratings. It ranked in the top ten of all programming for combined broadcast and basic cable shows, with 1.92 million viewers in the 2–11 demographic and a rating of 5.2/23. The Mighty B! had double the viewership as Bakugan.

In September 2008, the show had an average of 3.1 million viewers, and in the second quarter of 2008, the show ranked among the top five animated programs on television. As of March 2009, it was the third highest-rated show for children 2-11, only trailing fellow Nicktoons Back at the Barnyard and SpongeBob SquarePants.[20] During the third quarter of 2009, it averaged 2.6 million viewers and was number-one in its timeslot in the children's 2-11 and children's 6-11 demographics.

The second season premiered on September 21, 2009.[21] In November 2009, co-creator Erik Wiese subtly hinted on his Facebook page that the show had been cancelled: "Goodbye Bessie. Goodbye Happy. It was good knowing you."[22] The reason has never publicly been revealed; however, background artist and director Bill Wray has stated: "I'm not at liberty to say what were the combination of circumstances that lead to the shows[sic] demise, but the sad truth was it was preventable. Nobody wanted it to happen including the network."[23]

After January 2010, Nickelodeon stopped airing new episodes on the channel, with the remaining episodes of season 2 burnt off on Nicktoons starting in November 2010 and ending the series in June 2011. Reruns aired in North America on the Nicktoons channel as late as November 2015.[24]

Main article: List of awards won by The Mighty B!

Main article: The Mighty B! videography 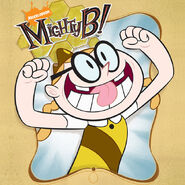 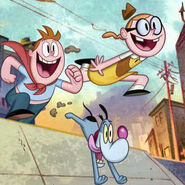 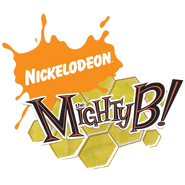 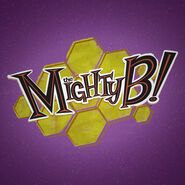 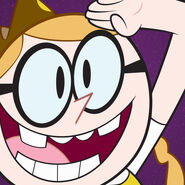 The original series name.
Add a photo to this gallery

Retrieved from "https://themightyb.fandom.com/wiki/The_Mighty_B!?oldid=15782"
Community content is available under CC-BY-SA unless otherwise noted.